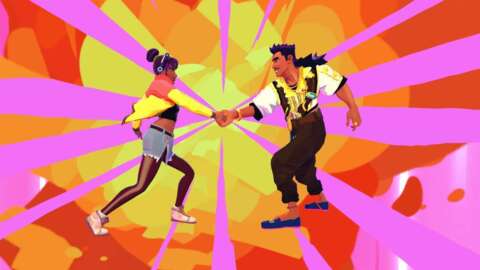 Annapurna Interactive is becoming known for publishing unique games off the beaten path, like the recently released Stray that has quickly gained mainstream attention as the cat game. It’s in that environment that the studio released its latest Annapurna Showcase, debuting a number of new games and sharing more details and release dates on announced titles. Here’s everything we saw during the showcase, including a handful of games and demos that are out now.

We got a closer look at Thirsty Suitors, the upcoming game from Outerloop Games. The lengthy gameplay demonstration showcased how battle works by focusing on one suitor in particular, your third-grade boyfriend Sergio. The demo detailed how you can use a taunt to put opponents in a “thirsty” mood, how battles can shift mid-match to require special abilities like calling his mom, and finally, how you can reconcile and become friends. We also got a brief look at the skateboarding action. Thirsty Suitors is coming to Steam, PlayStation, Switch, Xbox, and will come to Game Pass.

The showcase delivered a fresh look at Hindsight, the cinematic adventure game in which a woman sorts through boxes left behind and reminisces about her own memories of the past. It’s coming on August 4.

In a developer spotlight, we saw the heads of Cardboard Computer talk about how the studio was formed and their plans for their next game. Though not much was shown of the new untitled project, they did say this next game will focus on performance, and will have a funnier, quicker tempo. Though they said Kentucky Route Zero also had comedic elements, it was ultimately a tragedy, so this one seems to be lighter in tone.

Developer Dinogod debuted its next game, a Western sci-fi mash-up called Bounty Star. The trailer showed the female heroine and a dusty, Old West tone, before shifting to hulking mecha suits with missiles and melee attacks. It’s coming in 2023.

The developers of Outer Wilds appeared in the showcase to give a status update. The Switch version is still in development, and apparently taking longer than expected. But the studio did announce that new-gen upgrades are coming to PS5 and Xbox Series X|S. A brief trailer showed them running at 60fps. The updates will be available on September 15.

We saw the debut of a cute flight game called flock, filled with colorful, cartoony creatures. You appear to be a rider on the lead bird, guiding your flock around in formation. You can “gather your friends” on Xbox, PS4, PS5, and Steam, and it’s coming to Game Pass.

We saw a very brief teaser for the next game from the creator of Katamari Damacy, from a new studio called Uvula. The teaser showed what appeared to be a young person’s face, opening their eyes and then being licked by a dog. That was the whole thing. Your guess is as good as ours about what the game will be.

A new trailer for the first-person survival horror game The Lost Wild closed out the showcase. We saw your character navigating the jungle, gathering supplies from abandoned buildings, stumbling across a stegosaurus, and coming face to face with more carnivorous breeds of dinosaurs. No release date has been announced.

In addition to Cardboard Computer, we got brief developer spotlights on a handful of other studios. Yarn Owl is working on an unspecified game. Third Shift is making a game called Forever Ago, a story-driven road trip adventure game in which you play as an elderly man who goes on a journey in a van and records his time on the road. Finally, If Found developer Dreamfeel talked a little about its next unannounced game, including the fact that it stars a bunch of anthropomorphic cats standing on two legs.

The presentation also took a moment to highlight some of its existing library that will be coming to new platforms soon. Those included release windows for a few games, including two that will be part of the Game Pass subscription.

Everything Out Right Now

In addition to all the upcoming games, Annapurna showed a few games that you can get your hands on right now. Those include a demo for the upcoming Thirsty Suitors, as well as a Steam release for Hohokum and new-gen upgrades for the critically acclaimed What Remains of Edith Finch.