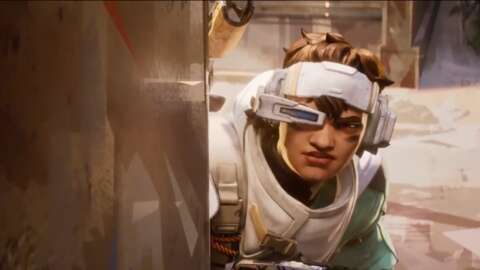 The trailer for Apex Legends Hunted debuted today, showing off the abilities and backstory of new legend Vantage, as well as announcing the dates for a gameplay reveal.

The trailer begins with new character, Vantage, in a squad with Fuse and Horizon. At first she struggles to fight, being saved by Horizon and scolded by Fuse. The battle in the Apex arena is intercut with Vantage’s conversation with her mother in jail. As she earns the trust of her teammates, her mom claims innocence, but also prevents Vantage from attempting to break her out. Upon exiting the jail, she sees a broadcast of an Apex Legends match, inspiring her to take to the games. At the end of the trailer, her squad stands victorious and she explains to the camera drone that she did this for her mother Xenia.

In terms of potential game teases, the trailer shows Vantage whistling for her bat, Echo, to distract an enemy. She then dons a visor, which highlights enemy positions and taps a pad on her arm, activating a jetpack to get to high ground. Afterwards, she uses a unique sniper rifle, which she took apart and put in her pack earlier in the trailer, to eliminate a multiple enemies. While the exact details are still yet-to-be-announced, this footage reflects the leaked information about her kit from earlier this year.

In previous teases, Vantage fought for Echo’s inclusion in the games (apparently pets aren’t allowed) and described her childhood in the outlands of the planet Pàgos. Her diary was even put up on Twitter. The trailer also announced that the gameplay reveal for the season would debut on August 1, just 8 days before the season begins on August 9. Here’s everything we know about Season 14 so far.