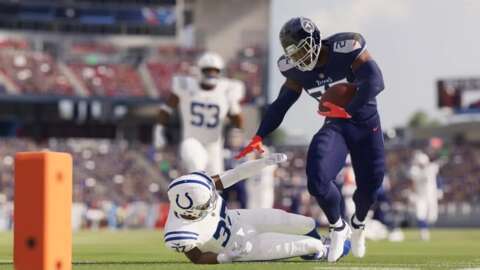 Madden 23 is one of the biggest games every single year, and that speaks to just how huge the NFL is. Every August, football fans look forward to taking over their favorite teams with new players, new gameplay mechanics, and perhaps even new modes. In Madden 23, you’ll find a familiar slate of modes–though one of them has a major new wrinkle–alongside some on-the-field overhauls which EA is calling the Fieldsense system. For more on that, plus details on the game’s preorder options, Franchise mode details, and more, here’s everything you need to know about Madden NFL 23.

If it’s August, it’s #MaddenSZN, and this year’s game continues a recent tradition of spreading out its access according to a number of criteria. If you’re simply looking for the global launch date, that’s an easy one: Madden 23 launches worldwide on August 19 for Xbox Series X|S, PS5, Xbox One, PS4, and PC. However, there are a few ways to play it sooner.

Those who have an active EA Play or Xbox Game Pass Ultimate subscription can access the game’s trial as early as August 16, as can those who purchase the game’s pricier All-Madden edition. If you’re playing via the game’s EA Play trial, you’ll have up to 10 hours of gameplay time available to you, though past seasons have included stopgaps in Face of the Franchise mode, so you can’t see the whole story without buying the game. Expect something similar in place for Madden 23.

Madden 23’s biggest change comes in the form of what’s called Fieldsense, an overhaul to several of the game’s on-field mechanics. New tackle animations and logic have redressed the play-by-play nature of the sport, while punchout fumbles and more gang tackles are meant to bring an added aggression to the game, which EA is collectively calling the Hit Everything feature.

The Fieldsense system addresses more than just tackling, however. It touches on virtually every part of the field, with EA Tiburon citing improvements to DBs covering wideouts, to pass rushers collapsing the pocket and getting to QBs, and with better blocking in the trenches. As always with an annual sports game, the player community will ultimately determine whether these changes are as sweeping and effectual as intended, but EA Tiburon has elected not to downplay the importance of Fieldsense.

Of the many subheadlines under the Fieldsense umbrella, the biggest one is perhaps Skill-Based Passing, which turns quarterback play into something more like fielding the ball in MLB The Show, where an active throw meter will help determine accuracy. EA Tiburon says this added level of control in the passing game will help players make back-shoulder catches and hit other tight windows like never before. After some beta activity, the larger Madden community seems to be in agreement, with many players saying once you get the hang of it, there’s no going back.

The complete Madden 23 ratings reveal week has come and gone, but if you missed it, don’t worry. We have complete coverage of the entire slate, including which players and teams are sitting atop their respective thrones, waiting to be leaned on in Madden head-to-head (H2H) and other modes. Check out all the ratings you need below, including this year’s 99 Club.

Last year’s multi-pronged Franchise update continues straight into Madden 23. This year’s game focuses on improving several of the game’s more recent features, such as the scouting system, and makes for a more frenzied free agency period. You can read a lot more about this mode in our Franchise deep dive, as well as our recent op-ed on how the game’s renewed franchise UI quietly makes a major fix for Connected Franchise players.

If you just want the spark notes, no worries. The biggest takeaways include that your scouting reports during a season will now reveal more relevant information for each player. Rather than unlock a quarterback’s break tackle attribute, for example, you’re more likely to learn something like throw power or short accuracy.

In free agency, players have more factors than just money to consider. Ultimately, players will still very much enjoy a payday, but other factors such as a team’s roster depth, the quality of its QB, or even whether or not it plays in an income-tax-free state will contribute to a free agent’s decision. Free agency bids are revised, too, so you won’t as easily know when you’re in the front of the pack for a player, which should make the system fairer for rival players, be they CPU or human.

Face of the Franchise

In Face of the Franchise, the game’s most campaign-like mode, players can take on one of five positions including the debut of cornerbacks as an option. This joins the four legacy picks: QBs, WRs, RBs, and LBs. In what may be a first for a sports sim, players will pick up their career after their rookie contract has expired, and the story will focus on players taking their career to the next level and finding success after having their contract’s team option expire.

Players will be free to sign as a free agent with a team of their choosing and rebuild a successful career that once generated some buzz after college. Most sports games have career modes centered around rookies with a lot of upside, or who are often even instant superstars, so this new narrative layer of perseverance should make for a novel approach to sports game storytelling.

Not much has been said about Madden 23’s other modes so far, such as Ultimate Team, The Yard, and Superstar KO. Currently it’s merely assumed the latter two both return. Given that they each funnel players into MUT in their own ways, that seems like a safe assumption, but we’re still waiting to learn more as we approach the game’s release date on August 19.

As mentioned, Madden comes in one of several packages, so if you’re looking to preorder Madden 23, you’ll want to pick the one that’s suited for your preferences.

Those who preorder the standard edition will unlock bonus digital items including two Elite player cards for Madden Ultimate Team (MUT). This is split with one offensive and one defensive player selected from a pool of available players on each side of the ball. You’ll also receive All-Madden gear to be used in MUT, as well as an undisclosed “Madden strategy item” for the same mode.

If you’d rather grab the more expensive version, here’s everything you unlock for preordering the All-Madden edition:

Unlimited early access on August 164,600 Madden Points for use in the game’s MUT and cosmetic shopsLimited-time All-Madden Team Elite player card (only available through July 22)Dual Entitlement (access to the game’s current- and last-gen versions)Exclusive MUT challenges available during the early access windowEverything included in the standard edition preorder package

In addition to this, EA Play subscribers will receive a Launch Welcome Pack for use in MUT that does not require a preorder, with more monthly drops coming all season.