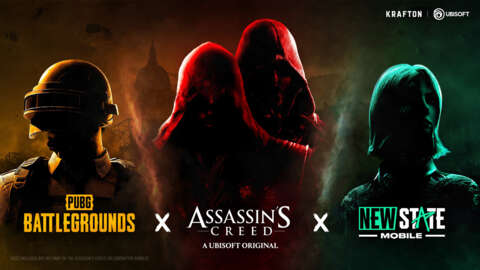 PUBG: Battlegrounds and New State Mobile are collaborating with Ubisoft for an Assassin’s Creed-themed event

PUBG Battlegrounds players will have the opportunity to earn a variety of themed cosmetic items from August 17 – September 22 that includes:

And for a limited time during the collaboration, a number of Assassin’s Creed-themed resources and props will appear across the Haven map. Players will find that Abstergo Industries has taken over one of Haven’s main buildings, which comes with a hidden Animus machine, as well as “strategically placed ‘Leap of Faith’ ledges” on the rooftop of the building.

New State Mobile’s Assassin’s Creed collaboration runs for a slightly shorter period of time, running from August 18 – September 21. Over the course of the event, players will be able to obtain over 30 unique Assassin’s Creed themed items including:

Players that log into New State Mobile during the collaboration will also receive daily log-in rewards, and they’ll also be able to obtain more rewards by “completing story missions to find out the truth behind the rumored presence of Templars and Assassins in Erangel and Troi.”

It wasn’t specified what costumes will be coming to Battlegrounds, so it’s unclear if Ezio and Shay will also appear in the title.