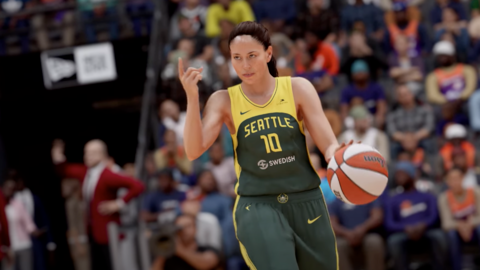 2K Sports has debuted the first gameplay footage for NBA 2K23, revealing what fans can expect in terms of visuals for this year’s professional basketball game.

The video shows a variety of NBA and WNBA stars passing, shooting, and scoring in dramatic fashion, with flashy camera angles and cuts helping to make the game look very cinematic. Cover star Devin Booker, in particular, gets a lot of attention, as do the stars of the game’s WNBA edition, Diana Taurasi and Sue Bird. Check out the trailer below.

Right now, all we have is the trailer–which looks good but lacks specifics about what exactly is new this year. 2K Sports mentioned that more gameplay details for NBA 2K23 will be released next week.

In terms of what we do know about updates and improvements from NBA 2K22, 2K has confirmed that Jordan Challenges are coming back this year. It’s also been confirmed that the PC and Nintendo Switch versions of NBA 2K23 are not based on the current-generation version of the game.

For more, check out GameSpot’s NBA 2K23 preorder guide. This includes information on the $150 Championship Edition, which comes with a 12-month membership to NBA League Pass.