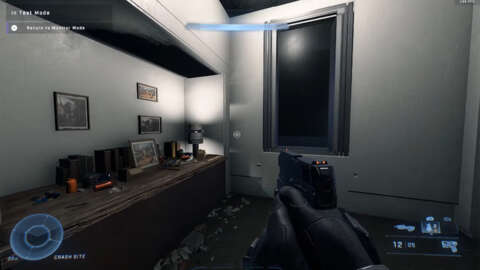 A Halo Infinite player has remade the Silent Hills P.T. demo in the game, using an unfinished version of the game’s leaked Forge mode.

Created by YouTuber and cosplayer Death Templar, via PCGamer, the recreated demo starts just like how the playable teaser does, with the player in an isolated room before they move into the now iconic, eerie hallway. As the player moves along the length of the room, notable set pieces such as the cabinet, picture frames, and other miscellaneous objects are all positioned to mimic the original.

The window at the far end of the hall is there too and, as the player turns right, it’s clear the entire recreation is exactly the same layout as the demo. Moving onwards, there’s a door that leads to the infamous bathroom–although the player doesn’t enter it–as well as the front door and balcony railing where the terrifying spectre would appear in P.T. Even though it doesn’t actually appear in this remake, the sounds of the ghost moaning and crying can be heard too.

Halo Infinite’s Forge mode is a sandbox creation feature that allows players to create sets using terrain pieces, props, geometric objects, and more. They’ll also be able to change the color and texture of the environment pieces, and use a new option called Object Scaling to increase or decrease the size of items.

When the Halo Infinite campaign co-op beta was released earlier this month, dataminers were able to uncover an unfinished version of Forge mode. The feature isn’t set to release until season 3, but a beta is scheduled for September.

Earlier this week, we reported another player who was able to use the leaked mode to recreate the fan-favorite Call of Duty map, Shipment.