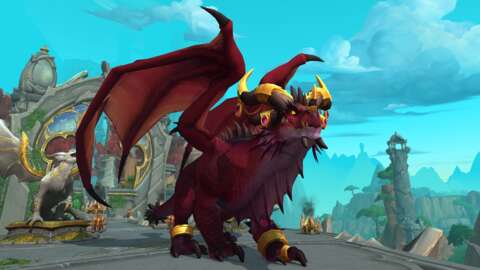 It’s looking likely that the story of World of Warcraft will jump forward in time following the events of Shadowlands, based on NPC dialogue in the alpha build of the upcoming Dragonflight expansion.

As documented by Wowhead, two conversations, one on the Horde side and one on the Alliance side, point towards “several years” passing between the end of Shadowlands and the beginning of Dragonflight, despite the “end” of the Shadowlands story having only taken place a few months ago following the release of patch 9.2. If you don’t want potential story spoilers, best turn back now.

In Stormwind, human leaders Genn Greymane, Mathias Shaw, and Turalyon talk about the state of the Alliance, with Shaw mentioning the time skip and the fact that the king of Stormwind, Anduin, has not yet returned following his departure at the end of Shadowlands. Turalyon, it seems, is ruling the Alliance in his stead.

On the Horde side, Blood Elf leader Lor’themar converses with the Nightborne leader Thalysrra, remarking on how several years have gone by since the Horde’s forces returned from the realms of death and the relative peace that has endured since then. It’s then revealed that Lor’themar and Thalysrra have married in between the events of Shadowlands and Dragonflight, with the two bickering over who proposed to whom. Players in the game’s community are a little salty about not being able to attend the wedding but are excited for the two Horde leaders nonetheless.

For what it’s worth, the time skip is not “official” just yet. While NPC characters on both the Horde and Alliance in the Dragonflight alpha do mention the fact that “several years” have passed since the heroes of Azeroth returned from the Shadowlands, dialogue on the alpha is subject to change and might not make it into the live version of the game.

Regardless, having a bigger-than-normal gap in the game’s timeline would be a nice change of pace. As any WoW player knows, having Azeroth (and sometimes all of reality) be threatened by a new world-ending threat every two years when a new expansion rolls around makes the game’s story more than a little silly at times. Players have long theorized that the spending time in the Shadowlands may have some time-dilation effects, but it’s currently unclear if the Shadowlands itself is responsible for the time skip or if Blizzard simply wanted more breathing room for the next chapter of the game’s ongoing story.