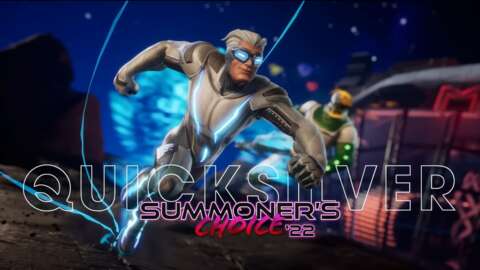 Two new fighters are coming to Marvel Contest of Champions: Quicksilver, the speedster brother of the Scarlet Witch and Galan, the humble farmer of the planetary nursery, previously known as the great devourer Galactus.

Galan releases on August 11. He can gather planetary mass by gaining buffs. After gathering over 200, a heavy attack will activate The Harvest, dealing massive damage to enemy fights. Chosen by fans to be added to the game this year, Quicksilver releases on August 25. His speed lets him almost effortlessly dodge enemy attacks and stack debuffs on them while he does so. He also gains momentum by dodging enemy attacks and landing basic hits. Momentum unlocks abilities the higher it goes, culminating a state called terminal velocity.

Marvel Contest of Champions is also introducing new story content associated with the fighters. The summoner (the game’s player insert figure) investigates the lost Cosmic Seed, a powerful Asgardian artifact capable of creating a Worldtree. In their search, they find Quicksilver battling The Silver Surfer, and start on the path of discovering who stole the Cosmic Seed from Asgard.

In an additional promotion, to celebrate the upcoming release of the She-Hulk TV series, players who download and log into Contest of Champions will receive She-Hulk for free, starting August 17 and ending September 28.