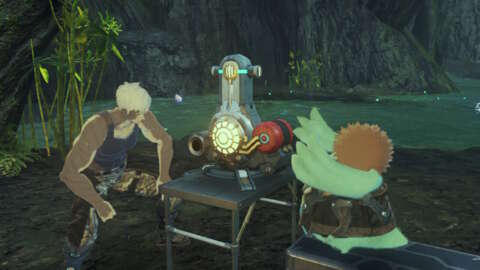 How Gems work in Xenoblade Chronicles 3

Crafting Gems with Riku is introduced in chapter 2 of Xenoblade Chronicles 3, at which point each character has one gem slot. A second slot is unlocked at level 20 and a third unlocked at level 30. Gems can be crafted at most campsites in the wilderness. Gems are split into four categories; Defender, Attacker, Healer, and Specialty, with five gems in each category.

Each gem can be upgraded up to level 10. Crafting or upgrading a gem will take a gemstone, a variety of random crafting materials found throughout the world, and an Ether Cylinder after level 1. You can pin a Gem’s crafting materials from the crafting menu, but finding specific items in the open-world has an element of chance, so you’re better off picking up as many materials as you can while exploring.

You can also bypass the required materials using Gold Nopon coins, although the required amount increases dramatically each level. If you are really struggling to find specific materials, you should use Nopon coins to bypass the requirements, as the needed materials change each upgrade level. It’s important to note that a single Gem can be equipped by multiple characters. That means every member of your party could have the same gem equipped if you wanted.

Every gem in Xenoblade Chronicles 3

Here is the complete list of gems available in Xenoblade Chronicles 3, along with their level 1 stats.