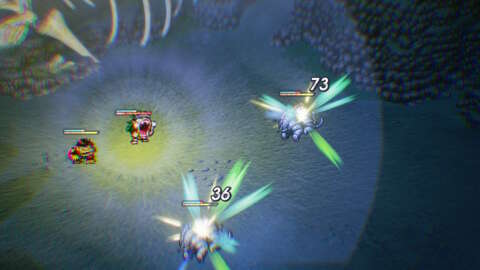 Living in prehistory was tough. The Prehistory chapter of Live A Live is no different. The enemies descend on you in hordes, and farting on them only goes so far. However, this chapter has a unique mechanic that you can take advantage of to make things a bit easier for your hairy caveguy: Crafting. Enemies drop all kinds of loot, and special NPCs wandering the wastes can cram them together for you to make better items. While there doesn’t seem to be any rhyme or reason to what gets dropped by whom, some of the recipes you can craft are definitely better than others, and knowing them ahead of time will give you a huge advantage.

There are a few things to note. Beru becomes inaccessible for the middle part of the chapter, and you won’t have the option to change her equipment after that. You’re best getting this stuff in the second hunting area. There are also two artisans. The first is in the north after you get kicked out of your tribe. The second is just before entering the enemy tribe’s compound. Finally, good equipment is no substitute for leveling up, but having it will make it safer to grind if you need to.

This time, you have three choices for weaponry. Two of them need the Stone Knife to be made, which can either be found in hidden spots or created using bone and hard rock. From there, you can pair the Stone Knife with a bone or stick to create the Quick Spear (+25 Attack +10 Speed) or with a leather strap to create the Fury Knife (+30 Attack). Only Pogo can use the spear, but both Pogo and Beru can use the knife.

This guy isn’t as clueless as he looks.

Beru, however, is better off with the Wildheart Sack, crafted using a Leather Strap and Dried Skins. This nets her +40 Attack, +20 Physical Attack, and +8 Special Defense. That’s enough to make Pogo jealous.

Pogo and Beru both have one obvious best choice for gloves, and they are the Bang Gloves. These are made using dried skins and hard rock. Slapping a pair of these on your wrists will net you +5 attack and +16 physical attack. Another option is the Thump Drum, created using dried skins and a stick. This will add +12 special attack. Note that you can equip Thump Drum as an accessory instead, which will gain you +6 special attack (however, you can wear five of them if you want to.

Once again, Beru gets the better equipment here. With dried skins and a stone knife, Pogo can create and equip Wildheart Armor. This gains him +16 defense and +10 physical defense while dropping his speed -8. With leather strap and pelt, Beru can get the Wildheart Dress, which nets her +32 defense and +10 special defense. Aren’t cavemen basically just wearing dresses already?

There is only really one piece of equipment you can wear on your feet, and that is the Rough Bands. You can create these with bone and beast horn. They add +2 defense, +2 speed, and +3 special defense. You can wear these as an accessory for +2 speed and +3 special defense, but since they’re also the only pair of boots you will find, you might as well have a set warming your toes.

The least exciting part of equipping your character is the accessories, but it’s also when you can pump a tonne of extra points into your favorite stat by jamming certain items in one or all of your five accessory slots. We’ve covered a couple already (the Thump Drum and the Rough Bands), but there are a couple more to consider.

The Fertility Charm can be created using a stone knife and hard rock. It drops your speed -10, but you gain a healing ability. Consider that Beru already comes packed with healing ability and Gori and Pogo both get attacks with minor heal before you sacrifice that speed. There’s the Pretty Flower which gives Beru and Pog +1 defense, +8 special attack, and +4 special defense, all for the low price of a beast fang and a hard rock. Finally, there’s the Fang Necklace. Only usable by Beru, it provides a meager +2 special defense for a beast fang and a leather strap.

Remember that, supplies permitted, you can just fill all five slots with a single item type. The only limit is your imagination and what you pick up off the ground.