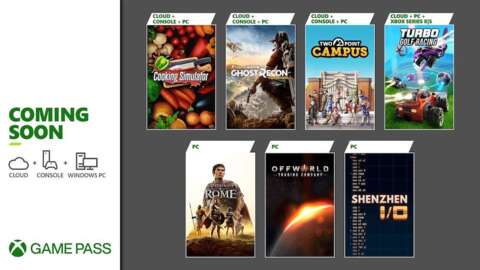 Xbox has unveiled the list of games coming to Game Pass during the first half of August. Xbox Game Pass subscribers will be able to check out seven new games over the next two weeks, including two day-one releases and a massive AAA game that’s available now.

Leading the way is Ghost Recon Wildlands, which is available today for Xbox, PC, and Xbox Cloud Gaming. Ghost Recon Wildlands is a cooperative focused third-person shooter set in an enormous open world. Set in Bolivia, Wildlands focuses on a battle between US Special Forces and a drug cartel that threatens to dismantle the country. Wildlands, which originally released in 2017, was the first open-world Ghost Recon game. It’s much better than its successor, Ghost Recon Breakpoint, and it’s worth checking out if you’re looking for a squad-based shooter to play with friends.

Starting August 4, subscribers will be able to claim Shenzhen I/O and Turbo Golf Racing. Shenzhen I/O is a PC-only puzzle game inspired by real-life engineering. This in-depth logic game tasks you with building circuits and writing code. Meanwhile, Turbo Golf Racing is a day-one Game Pass release. You could consider it to be Rocket League with golf instead of soccer. Up to eight players compete in arcade races while ramming giant golf balls down the tracks.

The second day-one release is Two Point Campus, which arrives on August 9. The follow-up to Two Point Hospital, Two Point Campus is a sim game revolving around building and running a school.

A trio of titles arrive on Game Pass on August 11. Cooking Simulator is a realistic cooking game with a physics system inspired by real cooking. The last two games for the first half of August are PC Game Pass-only titles: Expeditions: Rome and Offworld Trading Company. Expeditions: Rome is a turn-based RPG set in Ancient Rome, and Offworld Trading Company is a great real-time strategy game set on Mars.

The additions to the Game Pass lineup outweigh the removals in the first half of the month, but there are five games leaving on August 15: