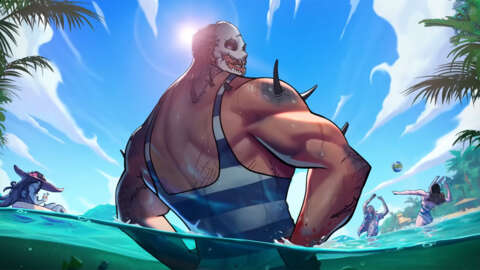 Dead by Daylight has been a popular and gory multiplayer experience for years now, but there’s a new spin-off, out today on PC, that shows off a more romantic side of the game’s gruesome killers. Called Hooked on You, the dating sim stars four of Dead by Daylight’s most notorious murders–The Spirit, The Wraith, the Trapper, and The Huntress–and tasks you with romancing them on The Entity’s beach realm.

You’ll need to chat your way towards true romance with one of these serial killers, find true love, and definitely avoid being horribly maimed in the process. According to the game’s Steam page, you’ll need to master a series of flirtatious mini-games to advance the plot, which involves answering quizzes, hunting for treasure, and carving up raw meat with a rusty machete. It’s romantic stuff that everyone can relate to.

Depending on the choices that you make, you’ll either find a new life partner with one of Dead by Daylight’s lovelorn killers or a potential paramour who’s ready to break up with you and your spine. As for the main game that Hooked by You spun out from, Dead by Daylight has seen a few major crossovers lately.

Its first anime crossover with the hit series Attack on Titan kicked off last month and added new outfits for survivors and killers and Resident Evil’s Albert Wesker has been added to the game. Fans of the asymmetric horror game and Netflix’s Stranger Things are also busy lobbying for the Stranger Things DLC to make a comeback and have launched a petition to make their voices heard.