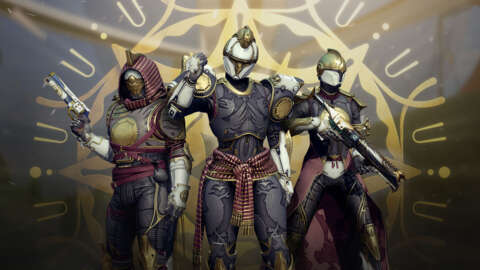 This week’s patch for Destiny 2 isn’t an intensive one, but it is an essential one for any Guardians looking to complete the Solstice event before it ends on August 9. In addition to squashing a few bugs, players can grab progress accelerators for their second and third classes–Titan, Warlock, and Hunter if you’re new to Destiny 2–which will speed up the completion of the event’s many triumphs.

Some of those Triumphs, which are necessary to complete to get enough Kindling to fully upgrade Solstice gear and earn the Flamekeeper title, are labor-intensive. One challenge requires players to play through 25 Crucible matches, another requires spending a lot of time in Savathun’s Throne World, and so on.

Taking part in Solstice is very worthwhile this year, as the armor that’s on offer can be fine-tuned to have some very desirable stats. Plus, they look neat with their fancy glowing effects. If you’re looking to get started, you can check out our Solstice guides on how to get Kindling, all the Solstice gear available, and whether the upgraded Event Card is worth throwing some Silver at.

In the technical department, Solstice transmog issues have been fixed and an issue where players couldn’t reobtain armor from Eva Levante has been addressed, according to Bungie. As Solstice brings Season of the Haunted to a close, Destiny 2’s next big chapter is set to be revealed on August 23. It won’t just be the start of Season 18 for the sci-fi sandbox, but also a look at what lies ahead for the Bungie-developed game in a new showcase.

For more on Destiny 2, you can check out an argument for why the next raid should be Rise of Iron’s superb Wrath of the Machine.

Progress accelerators are now in place for players completing Solstice Event Challenges on second and third classes (Titan, Warlock, and Hunter, for any new players).Partially fixed, progress accelerator missing on Hand Cannon challenge for Titans.Fixed an issue where players were unable to progress second and third character armor sets after fully upgrading their primary Guardian’s armor.