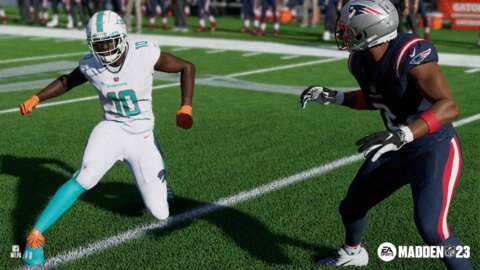 Ahead of Madden NFL 23‘s launch on August 19, EA has shared a list of changes that have been made in response to player feedback from the closed beta. While the most popular piece of feedback saw players asking the devs not to change the game too much before release, a number of improvements and balance tweaks have been made.

Another popular piece of feedback asked for refs to be returned to the field, but unfortunately the developer has said “referees returning to the field during live gameplay is not something we will be able to deliver in Madden 23.” The note adds that “refs is very high on our future roadmap,” with EA determined to only return refs in a high state of polish.

Balance changes and AI tweaks have been made in various features in response to player feedback, including improvements to play awareness, pulling linemen, pass blocking, and more. Notably, EA has also improved its onboarding process for the brand-new skill-based passing system, which beta players said was a game-changer, but difficult to learn.

Madden 23 will be out on PC, PlayStation, and Xbox consoles on August 19, though players who preorder the All Madden Edition will get a three-day headstart, unlocking on August 16.

You can read the full patch notes, including beta player feedback, below. For more on the changes that have been made in Madden 23 ahead of its August 19 release, check out our interview with gameplay producer Clint Oldenburg.

Don’t Drastically Change the Game/Leave Coverage Reaction Time AloneDEV NOTE: Rest assured Madden community, our vision of game balance is consistent with yours and the gameplay you experienced in the beta is what you’ll be playing on launch day. There has been polish added and bugs fixed from players’ feedback to make it even better, but the overall experience will be as you played in the beta.Add Referees back to the Game/On the FieldDEV NOTE: While referees returning to the field during live gameplay is not something we will be able to deliver in Madden 23, it is something that we want to get as badly as our players; we want to make sure that when refs do return, we are able to return them in a state where they are at a quality level on par with the rest of the characters on the field and this is something very high on our priority list for the future.Play Awareness – It’s too easy to run the same plays over and over again:DEV NOTE: We’ve made a number of changes since the beta to bring more balance to gameplay. We believe these changes will bring more variety to playcalling, but we want to hear from you, our community, when the game launches to let us know how you feel about these changes – each of these are options for further tuning via title update:Logic added so that when defensive backs are playing in linebacker positions, they will have slower reaction time to the running game.Removed the ability to hot route TE’s to a pass block assignment when in a 2-point WR stanceAdjusted the Corner Route in Bunch formations and the corner hot-route in the Hot Route Master and Slot Apprentice abilities to align with the other corner routes throughout the playbooks.Made improvements to man coverage pre-snap alignment vs. bunch formationsPulling Lineman are too slow/too indecisive:DEV NOTE: Tuning and AI changes were made to make pulling linemen be more explosive through the line of scrimmage. And on top of the foundational improvements, you’ll have to keep an eye on the Speed (SPD) rating of the pulling lineman, as slower OL’s could force you to lay off the acceleration mechanic while he navigates and faster OL’s will get through quicker allowing you to accelerate sooner on the play.Pass Blocking isn’t strong enough/Too many ‘Insta-sheds’:DEV NOTE: As noted in the Closed Beta Gridiron Notes, there was a bug causing super-wins to trigger too frequently early in the closed beta which was a primary contributor to the overpowered feeling. We do want to share that overall, having a powerful pass rush is critical to the balance of the game, and the pass rush at launch is still going to be more powerful than it was in Madden NFL 22.

Man Coverage Fake-outs are too frequent: Tuning to significantly reduce the frequency of fakeoutsAdded new logic so the fakeouts could be used in super-win situations where the ratings delta is heavily in favor of the WRUser Interceptions aren’t always responsive: Tuning to catch animations to increase range for jumping INT’sThese jumping catch animations will significantly decrease situations where the player is requesting ‘Play Ball’ without seeing the corresponding animation response.Too Many Fumbles:Tuning to significantly reduce fumble chance on QB hits inside the pocketTuning to significantly reduce fumble chance on QB hits while in the early portion of the throwTuning to reduce fumbles by non-QB ball carriers on hit-sticks and strip-ball attemptsSignificant reduction to ‘punch-out’ fumbles by AI-controlled defenders during stand-up tackles on Competitive game styleNot enough Hit-Stick Variety:Almost 30 new hit-stick animations have been added for launchMost of the existing animations have been tuned to increase varietyWR’s should win more contested catches in mismatches:Tuning to increase catch success for WR’s in contested-catch situations when in a mismatch.Logic added to include WR physical attributes such as height to play a more significant role in the success of contested catches.Skill-Based Passing can be difficult to understand:DEV NOTE: Even though it was not in the beta, when you first turn on the game at launch, you will have the opportunity to play through an onboarding flow to learn more about the new passing system. You will also have the opportunity to lab deeper in practice mode. And lastly, additional work has been done on the in-game feedback systems to make it even more user-friendly, such as color-coding the feedback text and passing reticle to match the level of accuracy. Be on the lookout for more developer deep dives closer to launch that will go into even more detail about Skill-Based Passing and what it can unlock in the passing game.

Franchise Draft CrashDEV NOTE: Unfortunately, this was a top issue we had in the Beta and got a ton of feedback on how it wasn’t working. We have since addressed this for launchLow Interest Players are signing frequently during Re-Sign periodsDEV NOTE: We have done several rounds of tuning in this area to try and make this more realistic in how and when players will re-sign with their current team.Sim StatsDEV NOTE: We fixed an issue where the longest pass completion in simulations was 25 yards. We have also focused on tuning sim stats to try and match real life stats as closely as possible. We know these won’t be perfect by any stretch and can see a wide range of results in any sim, but we hope they are close enough to give a realistic snapshot of what happens in real life.Salary CapDEV NOTE: We had a lot of feedback around how some teams didn’t have much salary cap space available to re-sign players and during the Free Agency period. We have continued to update real life player contracts as that information becomes available along with trying to tune the amounts players will ask for during the different stages. We hope the balance we have in the game right now will be a good balance between fun and challenging especially if you take over a team that doesn’t have much cap space at the start of your Franchise.CPU Draft LogicDEV NOTE: There were Beta reports about still seeing teams drafting QB’s when they already had quality starters on their team. Since the Beta, this has been a key area of focus as we have tried to utilize the new Player Tags feature as a new way to help prevent this from happening. There are still some cases where you may question why a team is drafting a player at a certain position, but we hope that this logic is much improved from previous years.

Eval Offers causing a crash in Free agencyFixed for LaunchGet Offers Trade TuningWe have done a few different rounds of tuning with our new Get Offers trade feature. There is still some more work here to do in the future, but we think we are in a good spot for Madden 23.NFL Draft Flicker IssueThere were a couple graphical issues we had during the Beta that have since been resolvedHigh Profile Players in FAWe saw several people mentioning that they were seeing several top tier players available in Free Agency. We tried to help improve this in a couple different ways: Tuned Player Motivations to help better match current teams (when it makes sense) to help give current teams a better chance of re-signing them.Continued to update real life player contracts for players that signed new deals to remove them from the list of potential Free Agents in year 1 of Franchise.As mentioned above, tuned amount of money players will ask for along with Team Salary Cap dataProgression History showing wrong training informationWe had a bug where the training history for offense and defense was flipped that has been fixed.Misaligned Assign Scout textFixed an issue where you couldn’t see the scouting region text when assigning a scoutScouting Tiers showed 4 stars in some screensFixed an issue where we showed 4 stars instead of 3.We added the stars this year to try and help better explain the Tier level of Scouts as we received feedback from players on Madden 22 that it wasn’t clear right away if Tier 1 is best or Tier 3Help TipsWe were missing new help tips for some of our new screens that we added (Free Agent Hub, Contract Negotiation, Scouting stage updates)